Thank you Mr. Richard Santos, without you this reunion would never have come about, State Representative King, Judge Avila, Ladies and Gentlemen:

It is particularly gratifying to see so many fellow former internees, their families and friends. It is also humbling to know that you have come from everywhere in this great nation and even from Germany.


Today, we are happy to be here of our own free will to memorialize that Germans and Japanese were interned here together in this very place. We thank Richard Santos and all the other people and organizations, as well as the State of Texas Departments that made this very monument possible-- it will be the first in the nation describing our internment.

With this monument, we want everyone to remember what happened here and that, the theme, AND JUSTICE FOR ALL, as conceived by Richard Santos, shall forever prevail.

Sixty years ago we did not come here of our own free will. We entered the barbed-wire fence guarded by high towers, in fear, anxiety, and the shame of being branded DANGEROUS ALIEN ENEMY. We believed that we were sentenced to internment for the duration of that war begun at Pearl Harbor, yet some of us did not gain release until three long years after the war ended.

We Germans, German Americans, came from all walks of life.  Among us were butchers, bakers, doctors, nurses, lawyers, homemakers, students, and infants. Soon there were German Latinos, from Central and South America. Many were here with their families, who were natives and citizens of those countries.

For the first time, many of us met Japanese who were interned with us. We were not, of course, segregated in any way. We learned, studied and appreciated the diverse cultures that each of these peoples brought with them. There were different kinds of music, languages, dances, poetry, and sports that we could observe and often participate in. The Internment Camp Newspaper recorded it all, complete with cartoon artistry.

We were able to compete in basketball and fast-pitch softball with our fellow Japanese internees, but we were frequent losers in soccer when the Japanese from Peru came.

All this was but an interlude between actuality and reality, because, we remained separated from life, from friends, and freedom by that insurmountable fence. Many had lost careers that could never be resumed, and income that could never be reclaimed. Many lost their homes, some homes were ransacked and precious memorabilia lost forever. The toll, the pain, the stigma of internment endured long after internment ended, to the point that some never ever discussed internment within even their own family.  The coercive effects of day after day after day, after stultifying day, changed our lives forever.

None of us, interned here, blew up a building, bridge or tunnel, nor sabotaged a military or industrial plant. We did not spy or send intelligence to a foreign power.

We even registered in peacetime, carried an internal passport complete with picture and thumbprint. We surrendered short wave radios, cameras, and guns as required by that act. Yet, we were interned!

Fortunately, Crystal City was the best of the many internment camps scattered around this country. We could live together in family units, discuss, argue, laugh and cry, while giving and receiving the support that only a family can do. We were treated humanely, had adequate food, clothing and shelter. We did need to brave the elements however for the communal bathhouse.

Medical care was very good under the direction of Dr. Martin and his public health staff. Internee doctors, Kappus, Mori, and Furuzawa augmented the public health staff. Dr Furuzawa is credited by a lady present today who stated unabashedly, that he was successfully instrumental in that difficult birth of her son on Christmas Day in 1943--her son is here with us today,. When needed, Dr. Martin procured the assistance of medical people from Crystal City and San Antonio.

For those here in their most productive years, the internment experience was frequently one of total disaster. For us in the late teen, early twenties years, it became a crucible, wherein we refined our goals, acquired the drive and the intensity to do something with our lives. In that cohort are MBA's, Doctors, Artists, and a Professor in one of the best universities in the U.S. in the fields of scientific and technological education and research, an Air Force Major, and experts in many other fields.

Sadly, there are many no longer with us. We give them honor by remembering them at this occasion, with the promise that we will never forget that they too were here. We remember too those that found it impossible to be here, no matter the reason, and we wish them well.

Although, then it was a most painful time, I am most pleased to be at this festive occasion, reunited with German and Japanese internees, their families, and friends. This marker monument will forever attest that Germans and Japanese were interned here together, and that this internment will never be forgot.

Thank you Richard Santos for making this a reality.


The Fuhr family photograph taken circa 1946 in front of their quarters in the Crystal City Family Internment Camp.

The youngest son (immediately to the right of his mother) of the three Fuhr boys, Gerhard, served in the United States Army with the 1st Infantry Regiment along the Four Powers border in Germany.  Gerhard died in April 2002.  Gerhard Fuhr's Big Red One shoulder patch rests at the summit (20,320 feet)  of Mt. McKinley, placed their by his nephew on  July 24, 2001.  Photograph below is courtesy of  Rob Fuhr. 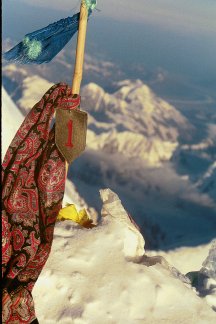